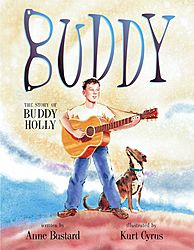 Anneographies: “Author Anne Bustard on her favorite picture book biographies and a few collected biographies, too, birthday by birthday.” A wonderful resource for teachers, librarians, readers, and researching writers. The blog debuted Aug. 1, 2006.

Anne Bustard on Anne Bustard: “I was born and raised in Hawaii, with a few years in California sandwiched in between. I was an avid reader as a child, and when I was a teen, I had secret aspirations of being a writer, maybe a poet. I moved to Texas to go to college and took a class in children’s literature my junior year. Revisiting beloved books and finding new ones fueled my dream. That’s when I knew–I wanted to write for children.”

Congratulations on the launch of Anneographies! For those who’ve yet to visit, can you offer a bit insight into the focus of this exciting new blog?

I’m blogging about my fave picture book biographies, and a few collective biographies, too, organized by the subjects’ birthday.

What inspired you to offer Anneographies?

Once a bookseller, always a bookseller, and a teacher, too. I love talking about books, and I love the idea of connecting people and books outside of the traditional four walls. I was also inspired by two uber information-rich blogs, your Cynsations and Chris Barton’s Bartography.

What was the timeline between spark and launch, and what were the major events along the way?

The idea for the blog came to me in early May, and I launched Anneographies on August 1, 2006. I spent the first month scrambling to accumulate the core data–books and birthdays, took a few mini-breaks in June, and then revved up again in July. Now I work on it a little bit each day.

What were the challenges (research, psychological, and logistical) of preparation?

Fact: Starting with birthday lists and then finding books to match was a mistake.

I quickly discovered my initial process was backwards–I had to start with the books. So off I went to my bookshelves, libraries, and bookstores in search of good reads.

Fact: The more days in the blog that I could match to books, the better.

I wish I had a match for every day of the year, but I don’t. If I expanded the list to include chapter-book-length works, I’d be closer. However, that’s a project for another soul.

So, about halfway through my first round of research, I decided to include a select number of collective biographies. Thank you, Kathleen Krull and Kathryn Hewitt for your wonderful series on the lives of presidents, artists, women and more. And thank you Cynthia Chin-Lee and Megan Halsey and Sean Addy for your terrific tributes to amazing women, Amelia to Zora: Twenty-Six Women Who Changed the World (Charlesbridge, 2005) and men, Akira to Zoltan: Twenty-Six Men Who Changed the World (Charlesbridge, 2006).

Fact: All picture book biographies and collective biographies do not contain birth and death dates (if applicable).

In each case, I had to know this critical information for my idea to work. I love playing detective. Who knew there was such a thing as the Social Security Death Index on the Web or that if I e-mailed the American Lighthouse Foundation, Bob Trapani, the executive director, would write me back with needed dates for Abbie Burgess? While all this searching took time, I didn’t mind a bit. It’s hot in Texas in the summer, and being inside was a good thing.

My problem was I couldn’t stop, and at some point, I just had to. There are a number of birthdays that are still unknown to me. I’ll never figure out Cleopatra’s, but I just know someone in Saratoga Springs, New York, knows when George Crum, inventor of the potato chip, lived. And I’m hoping that person will write me. I’ve done a lot of research on Mr. Crum and some others without the needed results.

Anyway. I’ve decided to feature a few biographies of people with unknown birthdays each month. I figure we can celebrate these great people any day.

Fact: There are zillions of books out there about Johnny Appleseed, Christopher Columbus, and Abraham Lincoln. Okay, not a zillion. But a lot. Most people only have one book written about them.

When a subject was featured in more than one book, I chose my favorite. My blog is not meant to be all-inclusive.

Why did you decide to use birthdays as a framework?

I’ve heard that “Happy Birthday to You” is the most popular song in the English language. Birthdays seemed like a universal bond that everyone could relate to.

And I have a theory. I think that people like to know if someone famous was born on their day. I know I do. I used to think if there were children’s authors born on my birthday, it was a sign that I could be one, too.

When I discovered–by reading Talking with Artists, compiled and edited by Pat Cummings (Bradbury, 1992)–that Pat Cummings and Lois Ehlert and I share the same birthday, I was thrilled. Believe me, having the same birthday as ex-vice president Spiro Agnew didn’t have the same affect. Of course when I finally started to write, I realized my magical thinking wasn’t enough. But I was grateful it was one of the many little things that kept me going.

You’re the author of a picture book biography, Buddy: The Story of Buddy Holly, illustrated by Kurt Cyrus (Simon & Schuster/Paula Wiseman 2005)(excerpt)(author interview). What draws you to this literary form?

Biographies and I have a special relationship. I chose my college major and, therefore, university based on my favorite biography from elementary school. I wanted to be like Anne Sullivan, Helen Keller’s teacher. I ended up switching my major to another field in education, but it was a biography that led my way.

I’m inspired by the lives of others–that one person can make a difference in the world–and I’m interested in the stories behind their stories. I have a high curiosity quotient, or maybe I’m just nosey.

Like many (or maybe most) writers, I’m very visual. I see pictures in my head when I write. For me, writing a picture book biography brings my experience full-circle. I don’t know how he did it, but somehow Kurt Cyrus got inside my mind’s-eye and Buddy Holly’s and West Texas’.

Kurt’s art invites the reader in, takes them to specific moments in time, and then interprets and adds to my words with glorious images and colors. Reading the pictures is an integral part of the book’s experience and allows children of all ages and abilities to be touched by the story.

What are some of your favorite recent picture book biographies and why?

Marvelous Mattie: How Margaret E. Knight Became an Inventor by Emily Arnold McCully (FSG, 2006). What a captivating read. Margaret E. Knight was the first woman to receive a U.S. patent and is best known for inventing a machine that made paper bags. I was in awe of Knight’s childhood tinkering and cheered as she fought and won her right to a patent in court as an adult.

Gregor Mendel: The Friar Who Grew Peas by Cheryl Bardoe, illustrated by Jos. S. Smith (Abrams, 2006). Simple, in the best sense of the word, this book offers a fascinating look inside the world of the first geneticist. From experimentation and the observation of generations of peas, Mendel’s theory of heredity was born. The artwork made me feel like I was standing next to Mendel in his garden. I loved it.

Theodore by Frank Keating, illustrated by Mike Wimmer (Simon & Schuster/Paula Wiseman Books, 2006)(excerpt)(author interview from the publisher). The oil-on-canvas illustrations in this book should be hanging in art museums. Wow. This biography of Teddy Roosevelt, told in his own words, offered me more than facts. I felt as if I also knew Roosevelt’s heart.