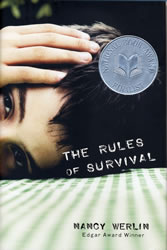 Nancy Werlin‘s debut novel, Are You Alone On Purpose? (Houghton Mifflin, 1994)(excerpt), was followed by two suspense thrillers, The Killer’s Cousin (Delacorte, 1998)(excerpt), which won the Edgar Award, and Locked Inside (Delacorte, 2000)(excerpt), which was an Edgar finalist and my favorite of her works. Nancy’s latest titles are Black Mirror (Dial, 2001)(excerpt), Double Helix (Dial, 2004)(excerpt), and The Rules of Survial (Dial, 2006)(excerpt). I last interviewed Nancy in 2001.

First, let’s catch up on Double Helix (Dial, 2004). Could you briefly describe the novel and what drew you to the story?

Double Helix (Dial, 2004) is a suspense thriller set in Cambridge, Massachusetts, a hotbed of companies doing work with genetic engineering, as well as a locale I know well. Eli has personal reasons for putting off college and taking a job at Wyatt Transgenics, but he isn’t prepared for what he uncovers there –about the company, and about himself.

I think of the book not only as a thriller, but also as a love story with two dimensions: it asks questions about the nature of romantic love, but also speaks strongly about the love between a father and a son. And of course, I wanted readers to leave the book with questions about genetic engineering and what it might mean in their own lives…soon. Very soon. That was what drew me to writing this particular book. I have questions myself.

For me, it was an unusual writing experience. In previous novels, theme grew for me out of character and plot, but with Double Helix, I began with theme and from that grew plot and character. I would also like to mention that Double Helix is science fiction in that it is fiction about science, but it is not speculative fiction. All the science in the book is current.

Congratulations on your latest, The Rules of Survial (Dial, 2006)! Could you tell us a little about the book?

The Rules of Survival (Dial, 2006) is written in the form of a long letter by Matthew Walsh, 17, looking back over the events of his childhood and early adolescence. From a place of safely, he’s telling the story of their previous life in hell with their mother, Nikki Walsh, to his little sister, Emmy, who does not remember very much.

I made a deliberate decision to have Matthew say up front, in the prologue, that he and his sisters have survived and are doing fine, because I did not want readers to be anxious about that as they read. The horror of the children’s day-to-day life is quite enough by itself. I should add that it is not really a book about physical abuse, though there is a bit of that in the children’s lives. But their mother’s real problem is–well, see what you think.

I witnessed a disturbing scene in a convenience store back in 2001. I wrote a short story based on what I saw, but the story wouldn’t leave me alone, and eventually I worked on growing it into a novel. You can read the short story and more about its transformation into a novel on my web site.

Five years from spark to publication. During the first two of those years, I was working on Double Helix, and I can only work on one novel at a time. Then I started Rules of Survival, but had to put it down for nearly a year at the 1/3 point. I thought I would not finish it. It was too painful to work on. But in the end, I couldn’t leave those kids alone. I had to make them safe. The only way to do that was to finish the novel.

My major challenge was psychological, as I’ve mentioned. Writing a book requires me to put myself into the mind and body of my main characters. It was a terrifying place to be. Yes, my characters are imaginary–but I am not naive. There are children and indeed, adults, who are prey to people like Nikki Walsh in their lives. Indeed, I have now heard from many early readers who have told me that they grew up in circumstances like those in the book. It’s not always the mother, of course. More often, frankly, it is the father. And sometimes, for adults, it is a boyfriend, a husband, or a wife.

An alternate title for the book might have been “Prey.”

Fear plays a large role in the novel.

I’ve also heard you speak before about writing and fear. Could you talk about your creative relationship with fear and how that same emotion manifests in The Rules of Survival? Is it a coincidence that one of your speaking topics is also a thematic focus? If not, could you share your related thoughts?

No coincidence, as you know. Yes, I do have a long-term relationship with fear. I talk about this a little in an essay that will be published in The Horn Book Magazine in the September/October 2006 issue. I will add here that when I’m writing, I am not thinking about my readers at all. I am thinking about my characters–projecting myself into them as fully as I can. And I am also thinking about the dark places in myself and in my life.

I use my art–the writing of books that are filled with characters trying to cope with fear, injustice, and sometimes outright human evil–as a way to grapple with those same things that I perceive in the world around me. My writing always knows what is going on in the darkest parts of my soul, long before I do. I trust it to do so. And over time and many books, I’ve realized that this is not the burden I first thought. It is a gift.

The Rules of Survival is “told” by your first-person protagonist Matthew to his litle sister Emmy, though he later comes to a realization about that. Why did you select this approach?

My realization that the story should be “told” to Emmy came to me like a revelation during the second revision; it was not part of my initial draft or vision. This is again a topic I deal with in my Horn Book Magazine essay (September/October 2006): this approach was a deliberate artistic choice to draw the reader into the story. If “you,” hearing the story, are not only yourself but are also a five year old girl…a child in danger…that does things to your emotions as reader that cannot be done when you are reading as an outside observer.

Sometimes a writer is lucky. Sometimes an idea comes from out of nowhere while you’re writing, and knocks you down and changes everything for a novel. I call this the “transformational idea.” They occur rarely, in my experience–I have only had it happen once before. This was a transformational idea. All you can do is get down on your knees, thank God, and then get up and get to work.

How has your writing changed over the years?

I believe that each book teaches you how to write it. Each book requires skills that you did not previously possess. Readers of my first novel (Are You Alone on Purpose (Houghton, 1994; reprint forthcoming from Puffin, 2007)) can tell that I was then a poor plotter, for example. Readers of my second novel (The Killer’s Cousin (Delacorte, 1998)) can see that I did not know how to transition in time; I had to label my chapters with the date. I learned about writing action sequences in my third novel (Locked Inside (Delacorte, 2000)). I learned to work with a large cast of characters in Black Mirror (Dial, 2001). These are only small examples.

Think of a writer as being like a carpenter. The writer’s toolbox should grow over the years; her skills should increase. At first she can only build a rough toolshed; by the end of her career, if all goes well, she can build a castle–or a perfectly balanced Shaker cabinet.

I choose projects not only because I long to write the book I’m thinking about, but because each one pushes and challenges me. If there is not a period in the writing of a book where I think, I can’t do it, then I am working on the wrong project.

What everybody says, and they say it because it is true: read, read, read. And in your own writing, learn to finish projects and then to revise them.

I have a lot of thoughts about this one, but I feel an essay coming on! Or a speech. So I will refrain.