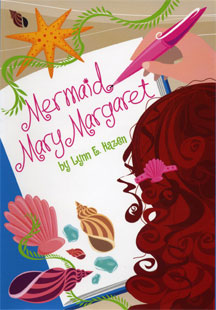 Lynn E. Hazen’s first novel, Mermaid Mary Margaret (Bloomsbury, 2004), written for middle grade readers, was hailed “a winner” by Kirkus Reviews. She followed her success with a picture book, Buzz Bumble to the Rescue (Bloomsbury, 2005). Her early reader, Cinder Rabbit, is forthcoming, and she is nearly finished revising her young adult novel, Shifty.

When Lynn is not busy writing, she enjoys visiting schools and libraries as a guest author. In fact, Lynn was a finalist in SCBWI’s “Idol” competition (highlighting her school visit presentation) at the 2005 National Conference in Los Angeles. Lynn earned an M.F.A in Writing For Children and Young Adults in 2004 at Vermont College, where she won the Houghton Mifflin Award for her YA novel-in-progress, Shifty. She also has an M.A. in Education and a B.S. in Applied Behavioral Sciences.

Let’s start with you! You splashed onto the children’s book scene with a middle grade novel, Mermaid Mary Margaret (Bloomsbury, 2004), and buzzed forward with a picture book, Buzz Bumble to the Rescue (Bloomsbury, 2005). Could you tell us a little about your path to publication, including the soaring moments and any stumbles along the way?

As a preschool teacher and director, I read zillions of picture books aloud to the children. So I always imagined my first book would be a picture book. I received many encouraging letters from editors but no acceptances until I tried writing a middle grade novel—Mermaid Mary Margaret was my first published book. And a year later, my first picture book was published, too.

What about your books? What was your initial inspiration for Mermaid Mary Margaret?

I had at least three inspirations for Mermaid Mary Margaret. One was imagining what several spunky preschool kids would be like when they were ten or eleven years old. Knowing these great preschoolers helped me create a believable character, Mary Margaret. I enjoyed spending time with her. My second inspiration was my grandmother who came to the U.S. from the Greek island of Rhodes. She never had a chance to go back to the “Old Country” as she called it, so I thought I’d send my fictional character on a trip to the Greek Islands with her grandmother. Finally, I was inspired by a workshop at an SCBWI conference given by Paula Danziger on “How to Be Seriously Funny.” One of Paula’s writing prompts launched me into the first few pages of what eventually became Mermaid Mary Margaret. The great thing was, I sent Paula a letter and a copy of MMM, telling Paula how her workshop had helped me get started. And she later called me on the phone, and told me she liked the book. That was a nice surprise and very cool.

For Mermaid Mary Margaret, it took about seven months to write a rough draft. I was lucky to have the first three chapters read by an editor for critique at our local Asilomar conference. Victoria Wells Arms liked it, had some great suggestions, and wanted to see it again. That was a major event for me.

My critique buddies also gave me great encouragement and advice. It took about two years from my first scribbled sentences to a signed contract. Then another year and a half for revisions, editing, copyediting, and the rest of the publication process before Mermaid Mary Margaret was on bookstore and library shelves. But it was worth the wait. (And of course there were many years of honing my craft prior to writing Mermaid Mary Margaret.)

Working full-time running my preschool while raising a family and juggling time to write was a big challenge. Not giving up, of course is certainly challenging at times for most writers, I think. Writing is fun, but hard work. Since I had never been to the Greek Islands myself (I still hope to go someday), I needed to research a bit. So I read books, surfed the Internet, and basically “pretended” I was there.

At one important point in my novel, Mary Margaret and her grandmother see a dolphin, and I wanted to make sure that was a true possibility, so I surfed the web and found a Greek scuba and snorkel trip captain. I emailed him my questions re: local sea life. When he kindly emailed back, that made the world seem smaller and friendlier, and my story all the more real.

How about Buzz Bumble to the Rescue? How did you get in touch with your inner bee? What are the main considerations in writing an animal (in this case insect) picture book?

Well, Buzz is a “new baby” sibling rivalry story dressed in bee “clothing” with the “garden” as a universal family setting. It was inspired by the fat bumble bees in my own garden, the preschool families again, and the very real emotions that children feel. The illustrator, Jill Newton, did a wonderful illustration of pitiful Buzz sitting on a daisy all alone after landing on his “bumble bum.” When Ansel Antennae, the famous photographer from National Bee Graphic Magazine, pays attention to cute little Baby Bumble instead of Buzz, poor Buzz feels horribly overlooked. That sums up my feelings when I get a rejection sometimes, so maybe the “inner bee” really is me.

My main considerations for any picture book are humor, emotion, just the right details, read-aloud-ability, pacing, page turns, and of course, plot. Something has to happen to your characters that young readers will care about and relate to. Oh, and you have to accomplish all that in as few words as possible, while creating plenty of illustration possibilities. No easy task.

What are you reading these days?

This week I am reading a stack of early readers, mostly the winners of the new ALA Theodor Seuss Geisel Award. Why? I just had a new book accepted. It’s an early reader called, Cinder Rabbit. It will be out in a year or so and I had a lot of fun writing it. So I plan to write more early readers. And I’m always reading new middle grade and YA novels, because I have a couple of those projects in the works, too. I’ll keep you posted.

My early reader, Cinder Rabbit. I’m also finishing revisions on my new YA novel, Shifty. After that, an editor is waiting to see a graphic novel script. And then? More middle grade novels, early readers, and picture books.

Nope, that’s about it. Thanks, Cynthia. After rereading what all my next projects are, I’d better get cracking. Please check out my websites for news about my upcoming books as well as fun activities for kids and teachers at www.LynnHazen.com and www.MermaidMary.com.